When there is a significant slackening of the skin on the inner side of the thighs, an isolated liposuction cannot suffice and only a re-tensioning of the slackened skin can correct this defect : this is the thigh lift or crural lift.  The thigh lift will thus allow the removal of these disgraces by removing the excess area of damaged skin. Doctor Richard Diacakis, a cosmetic surgeon in Paris, systematically associates a thigh liposuction with the thigh lift in order to perfect the result.

The most frequent causes of this sagging skin are essentially skin ageing or significant weight loss.

As thigh lift is most often an aesthetic operation, no social security coverage is possible and no sick leave can be prescribed. It is therefore important to allow for a period of unavailability of 7 to 10 days after the operation.

Social security coverage (after obtaining prior agreement) is only possible in the case of surgery to repair the after-effects of obesity.

Before a thigh
lift operation

It is essential to stop smoking one month before and one month after the operation as there is a risk of creating skin suffering (localised necrosis) or disunion.

The procedure
for a thigh lift operation

On the morning of the operation, Dr Richard Diacakis, a plastic surgeon in Paris, makes drawings that will serve as reference points during the operation. These drawings mark the areas of liposuction and the part of the damaged inner thighs to be removed. Photos are systematically taken.
Most often a general anaesthetic is used.
The thigh lift operation requires a 24-hour hospital stay. 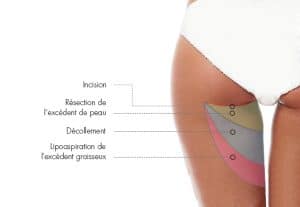 First of all, Dr. Diacakis systematically performs a thigh liposuction, the extent of which will depend on what was decided during the consultation.
Then, a skin incision is made in the groin and gluteal crease, according to the drawings, in order to loosen and re-tension the skin. Excess damaged skin is removed.
The scar is then placed in the groin and gluteal crease. The closure of the scar, which is located in a fold, requires particular attention in this operation so that it is as fine as possible and that it heals as quickly as possible. This scar will most often be closed with absorbable sutures.
The operating time for a thigh lift operation with Dr Richard Diacakis is 2 to 3 hours depending on the amount of work to be done.
A compression bandage will be applied in the operating theatre as well as the prescribed compression sheath. Sometimes the scar will be left to air, without a bandage, given the difficulty of holding a bandage in this location and the fact that it is sometimes preferable to leave a scar in a fold to air.

Dr. Richard Diacakis never makes a vertical scar along the inner side of the thigh.

After a thigh
lift operation

The pain is generally mild, easily relieved by painkillers.
Doctor Richard Diacakis, a plastic surgeon in Paris, systematically puts in drains which will be removed most often at 24 hours in order to minimise the risk of haematoma and to accelerate the recovery of skin suppleness.
The discharge will generally take place the day after or two days after the operation.
To limit the risk of phlebitis, you will be prescribed a subcutaneous anticoagulant and the doctor will also encourage you to get up and walk the day after your operation.
It is necessary to plan a rest period of 10 to 15 days depending on the person and their activities.
The bruises, which are common, will disappear in two to three weeks. Skin sensitivity problems regress within a few weeks.
It is strongly recommended that someone accompanies you home when you go out.
The stitches are absorbable.  Several check-ups are to be scheduled with Doctor Richard Diacakis at 8, 15, 1, 2/ 3, 6, 1 and every year.
Sports activity can be resumed after 6 weeks.

Any surgical operation may involve risks of complications.

From the first day, you can see that your thighs are tight and that the damaged skin has disappeared.
From the 15th day you can resume an active life.
From one month the result is estimated at 40/50% and already gives a real aesthetic result.
Between 3 and 6 months the estimated result is 80%.
At 1 year the result is considered definitive.
The final appearance of the scars is generally obtained after 6 to 12 months.
In some cases, it is necessary to wait more than a year so that all the small sensations such as the complete sensitivity of the skin, tightness, tingling or others, which do not interfere with your daily life, disappear.

The price of a thigh lift

During the consultation an estimate will be given to you including :

Only the first consultation is charged. Dr Richard Diacakis does not charge a fee for all other pre- or post-operative consultations, without any notion of time.

For all cosmetic surgery the patient has a minimum reflection period of 15 days.

If you wish to have more information about thigh lift, do not hesitate to contact Dr. Diacakis plastic surgeon in Paris through the contact form.